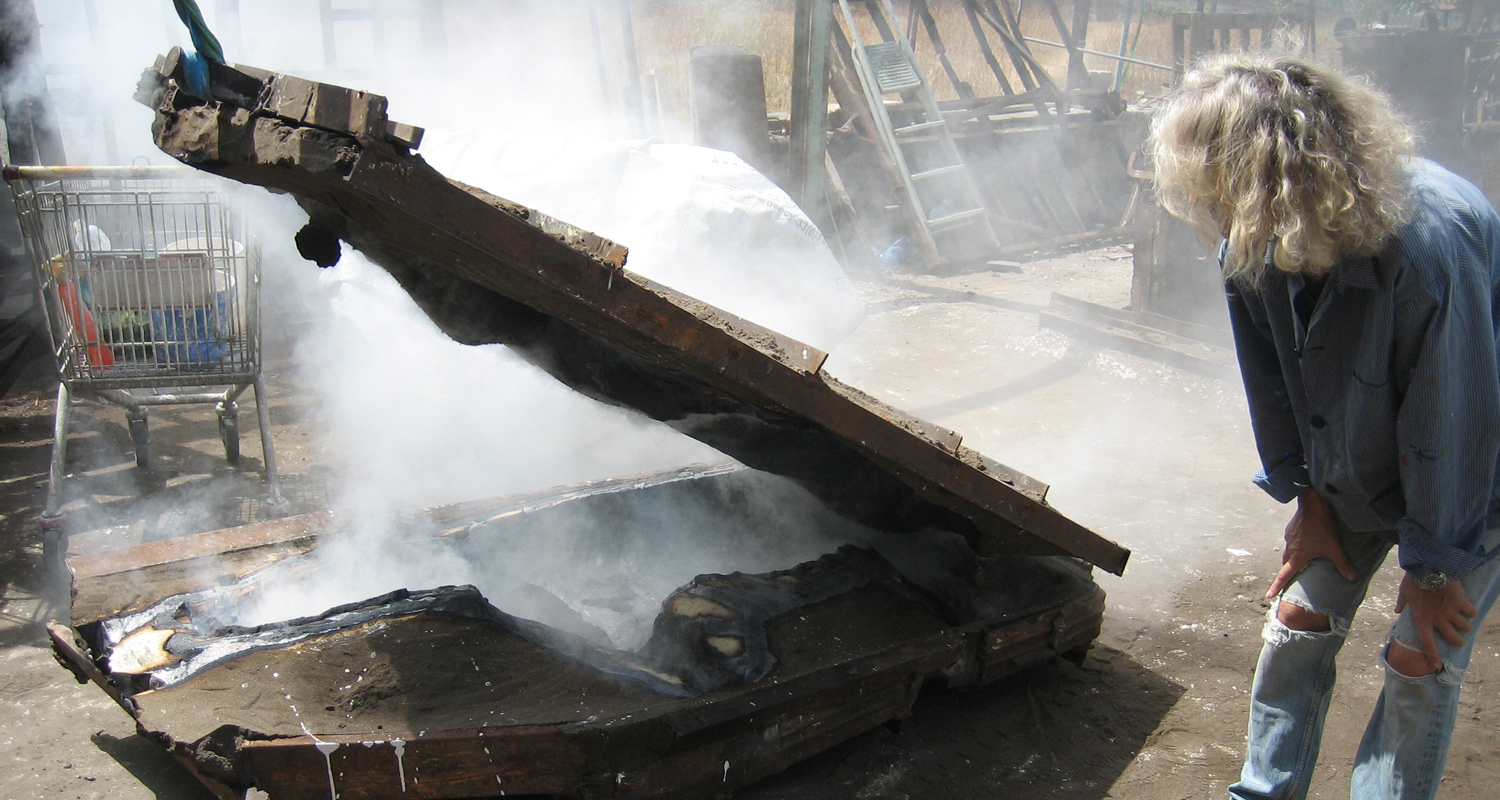 At the beginning, I would like to talk about holes. Being an eyewitness I can assure you that none of these smoothly polished bronze surfaces you have here in front of you were brought into this world without at least one unexpected hole.

The hole signifying imperfection, within the cast itself and within art in general, is the absolute ruler of a foundry – at least our foundry.

I assume that the majority of readers never had the chance to witness a bronze casting process.

In brief, it’s done like this: The artist creates the prototype model and then the so-called casting mould is made out of sand mixed with resin, a container for the negative form of the model looking like a box you can open up. The model is taken out of this casting mould, leaving a cavity which the model – or rather its shape – has impressed into it.

The casting mould is then closed up with a hole on top connected to the cavity. The liquid bronze is being poured through this hole, filling out the cavity left by model. Of course, I have left out many things going on in the mean time.

The casting of bronze is an exhausting occupation. This is why the next step after casting the liquid bronze is opening a bottle of beer. The time it takes to drink a beer is usually enough to cool down the bronze inside the casting mould.

Then – the “opening”: the casting mould laying on the ground and around it everybody who had been present at the time of casting; particularly the anxious artist, who probably already circled around his or her future work of art. While the casting mould is slowly opened everyone tilts their head slightly towards it in anticipation to see the result as soon as possible. But in reality, what they all really want to see, because they all secretly expect it, is – a hole. Of course, you hope that the sculpture has none, but in reality they are always there because you just expect them to be there – it’s almost like some foreboding premonition.

The casting mould is being opened, all eyes scan quickly over the whole cast and: there it is! A hole reveals itself to all scrutinising glances. Within the following phase, everyone gathers around the casting mould and starts discussing the hole: how to eradicate it and how it materialised – it might have been the metal: too hot or too cold – no, maybe a waft of air – although, maybe the model, crafted too delicately, is to be blamed, or …

So everyone is standing around the casting mould, to scrutinise and discuss it: the sculpture is almost forgotten, the true hero of the cast is the hole.

I’m still absolutely overwhelmed by the spreading amazement, whenever a cast comes out of the mould without a hole.

The artist commences to clean up the sculpture and to look whether there really is no hole; maybe beneath the burned sand; one hole at least; there should be just one, at least a tiny one!

Although my father far less so, because he is a special kind of bronze caster – he is also a welder: he could be described as someone who knows how to join together what is separate, how to fill empty spaces.

He does not loose countenance at the sight of a hole; guided by his doctrine, reminiscent of Goethe, “what cannot be averted, should be mended”. But are the culprits for the existence of these holes not the artists themselves and among them the people at our foundry who at some point in their artistic career had decided to cast their works in bronze? It is up to you, dear reader, to ask them why they chose this metal.

This question never occurred to me: ever since I was a child and got acquainted with the colourful and puzzling company of artists who crowded my mother’s kitchen, it seemed clear to me that they all were more or less a little “bronze aged”. If you want to know exactly what I mean, just try to invite a couple of artists over to your place for lunch for about a week at a time!

Apropos Bronze Age: bronze was one of the first metals used by mankind. The discovery of making bronze was the basis for manufacturing weapons and domestic artefacts in the bronze-age from the end of the 3rd to the beginning of the 2nd century BC, an age which lent its name to this metal. During the following centuries, bronze was used for artistic purposes. It seems significant to me that the very bronze we now use for sculptures like the ones we have here in front of us was formerly used for swords and pots – for “war” and “kitchen”.

From the midst of these things, the ones most deeply rooted within mankind, the primeval urges and the stomach, art is created.

We should now turn from the holes in the stomach to the rather “philosophical” holes. There are many people who assume that our lives revolve around a hole. In the famous novel “The Man without Qualities” („Der Mann ohne Eigenschaften“) by Robert Musil, the female protagonist Clarisse – whose character is based on a model from Nietzsche’s philosophy – states that life is like a ring: an incessant circling around the centre which remains intangible, because it does not really exist; in its place: a hole.

The idea of life as permanent movement is the basis for another, much-applied metaphor of human reality: “pantha rhei”/ “everything flows”, as Heraklit said. Nothing can be held, life is like a river, it does not permit us to step twice into the same water. Is this not what art always endeavoured to achieve – to capture a moment in life and make it eternal?

Understanding – “capire” – comes from the Latin “capio” – to capture, to take, to hold.

You would suspect that art has often this Faustian ambition to explain life and therefore the very source it springs from.

In order to understand life, art captures and ties it down, attaches it to a material to tear it from the flow of the river, as if the work of art left behind in the world could become some kind of a “time hole”. In a moment of self-elevation Horaz wrote with reference to his own poetic work: “I have left behind a memorial, more durable than bronze” (“exegi monumentum aere perennius”). Bronze stood for an eternally durable material, because it resists all wear of the elements and history.

Maybe some people do not live their life to the full, because they want to leave something behind which outlives them? Something like a hole in time? Even if art has nothing to fear from the weather nowadays, you could still ask yourself, whether the idea of bronze as “aere perennius” may not still be part of the work of these artists, or the idea of art as something that can penetrate time. If this is the case, then an artists endeavour is not that far away from our own: to leave something behind in this world which remains in time and history and does not get carried away by the river. We watch the river and throw a stone into the water, hoping, the impact may be visible – and sometimes it really remains.